While on a trip to the Hawaiian Railway Historical Society I noticed that there were witness marks in the cabs of several steam engines that caused me to ask what might have once been there. The answer was a cased clock, similar to the chronographs found on 19th and early 20th Century sailing vessels. Well I was later inspired by the same style of cased clock or chronograph installed in the Glenbrook at the Nevada State Railroad Museum. Having been built in 1875, Glenbrook has served as inspiration for a number of details typical of the period.

Of course desiring one of these clocks in scale and making one that works was a taller order than anticipated but, fortunately I recalled a tiny working clock I’d seen in a miniatures shop in England a few years back. I’ve located the quartz clock ‘fit-up’ and developed the investment cast, mirror polished brass case in the style of a prototype Seth Thomas clock. At an overall diameter of about 1 5/16″ this clock is perfect for 1.5″ locomotives and smaller 2.5″ narrow gauge locomotives. I’ve already had one go out for installation in a caboose as well.

Now I am offering a larger 2 3/16″ diameter highly detailed cased clock in the Seth Thomas style. This is an ideal clock for the larger 2.5″ and 3.75″ scale locomotive. Like our smaller clock it features a solid brass case and beautifully appointed dial.

Both kits include the mirror polished case; precision Quartz movements; and a Nylon dust cover for the back of the clock. The quartz movement is battery powered and as a concession to scale the case does need to be removed to set the time or replace the battery. 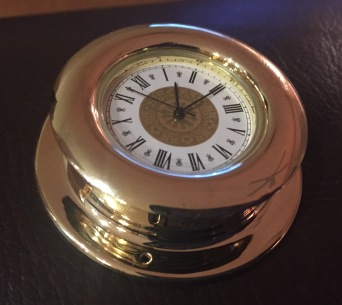